In Ingress-Nginx (v0.21.0), a new Canary feature has been introduced that can be used to configure multiple backend services for gateway portals, as well as to control traffic distribution between multiple backend services using specified annotations. . In v2.0.2, KubeSphere upgraded the Ingress Controller version to 0.24.1 to support Ingress-Nginx-based grayscale publishing.

Note: The sample yaml source files and code used in this article have been uploaded to GitHub and can be cloned for local convenience.

Based on the Nginx Ingress Controller, KubeSphere implements the project's gateway as a proxy for external traffic and a reverse proxy for each service in the project. Ingress-Nginx supports the configuration of Ingress Annotations to implement grayscale publishing and testing in different scenarios. It can meet the business scenarios of Canary Publishing, Blue-Green Deployment, and A/B Testing.

The above four annotation rules can be divided into the following two categories:

Step 1: Create Project and the application of Production version

1.1. Create a business space (spacespace) and a project (namespace) in KubeSphere. You can refer to Getting Started with Multi-tenant Management. A sample project has been created as follows. 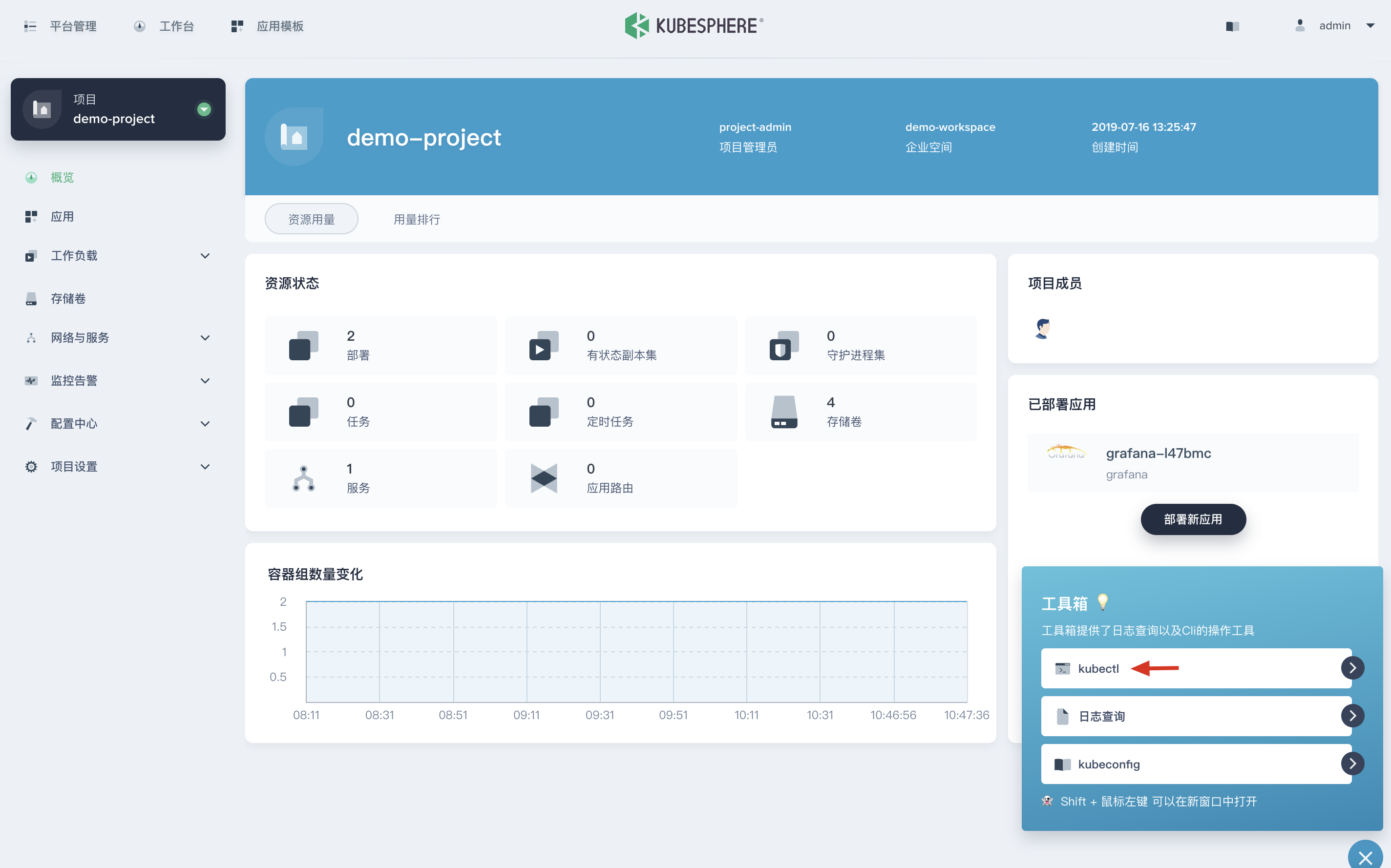 1.2. To create an application easily, create a workload and service in your project by edit yaml , or use the toolbox in the bottom right corner of KubeSphere to open web kubectl and create a Production version of the application with the following command and yaml file and expose it to the cluster access. Create a deployment and service for the Production version as follows.

The yaml file used is as follows:

1.3. Create a Production version of Ingress.

The yaml file used is as follows:

2.1. At this point, you can see all the resources under the ingress-demo project under the enterprise space demo-workspace of the KubeSphere UI.

2.2. Access the Production version of the application to ensure that the current project has opened the gateway, open the gateway under the external network access, the type is NodePort.

4.1. Use the following canary.ingress yaml file to create an application routing (Ingress) based on the weighted Canary version.

Note: To enable the grayscale publishing mechanism, first set nginx.ingress.kubernetes.io/canary: "true" to enable Canary. The following Canary version of the Ingress example uses an annotation rule based on weights for traffic segmentation, which will be assigned 30% traffic request to sent to the Canary version.

Note: After the application's Canary version is based on the weight (30%) for traffic segmentation, the probability of accessing the Canary version is close to 30%, and the traffic ratio may have a small range of fluctuations.

Based on Request Header

4.3. The classic application scenes based on Request Header's traffic segmentation are greyscale release or A/B test scenes. Refer to the screenshot below. Add an annotation of nginx.ingress.kubernetes.io/canary-by-header: canary for Ingress in KubeSphere's Canary edition. (The annotation value here can be random.) Realize the current Ingress and segregate the traffic  based on the Ingress.

4.4. Add a different Header value to the request and access the domain name of the app again.

For examples, as mentioned in the opening paragraph, when the Request Header is set to never or always, the request will not or always be sent or always sent to the Canary version; For any other Header value, the Header is ignored and the request is prioritized by comparison with other Canary rules (the second request has a 30% weight as the first priority).

4.5. You can add an nginx.ingress.kubernetes.io/canary-by-header-value: user-value to the previous annotation (that is, canary-by-header). Used to notify Ingress to route requests to the service specified in Canary Ingress.

4.6. The application's domain name is accessed as follows. When the Request Header satisfies this value, all requests are routed to the Canary version (this rule allows the user to customize the value of the Request Header).

Similar to the Request Header-based annotation usage rules. For example, in the A/B 测试 scenario, you need to let the users in Beijing have access to the Canary version. Then when the cookie's annotation is set to nginx.ingress.kubernetes.io/canary-by-cookie: "users_from_Beijing". Now the background user can check the logged in user request, and set the value of the cookie  users_from_Beijing to always if the user access source is from Beijing. For always, this will ensure that users in Beijing only access the Canary version.

The grayscale release can ensure the stability of the overall system. When the initial grayscale is used, the new version can be tested, found and adjusted to ensure its influence. This article demonstrates and demonstrates the use of Ingress and Ingress Controller for grayscale publishing based on Kubeel, and details the four Annotations of Ingress-Nginx. Users who have not used Istio can also easily implement grayscale publishing with Ingress-Nginx. Released with the canary.