A node is a worker machine in Kubernetes, a node may be a VM or physical machine, depending on the cluster. Each node contains the services necessary to run pods and is managed by the master components. Node management in KubeSphere fully meets the enterprise's requirements for cluster operation and maintenance. It supports real-time monitoring of CPU, memory, storage, Pod usage and node status, as well as the running status of the Pod on any node. In addition, it also provides rich monitoring metrics, such as CPU and memory utilization, CPU load average, IOPS, disk throughput and utilization, network badwidth, etc.

Firstly, sign in with cluster admin, select Platform → Infrastructure, enter into the node management panel. As a cluster-admin, you can view all of nodes and monitoring details. Click a node in the list to enter its detail page, then you will see the resource and node status, Pods status, annotations, monitoring and events of this node.

KubeSphere provides the following five states, the cluster administrator can determine the load and capacity of the current node through the following states, and manage the host resources more reasonably. It is worth mentioning that node management supports fine-grained resource monitoring, which can filter monitoring data within a specified period to view changes, also supports dynamically watching the monitoring metrics. Node affinity is a property of pods that attracts them to a set of nodes. Taints are the opposite – they allow a node to repel a set of pods. Taints and tolerations work together to ensure that pods are not scheduled onto inappropriate nodes. One or more taints are applied to a node; this marks that the node should not accept any pods that do not tolerate the taints.

For example, the memory usage shows up at 90% in this node as following, which means there is not recommended to schedule new pods on this node, you can set a stain on it. Generally, creates a taint that marks the node as unschedulable by any pods that do not have a toleration for taint with key key, value value, and effect NoSchedule. (The other taint effects are PreferNoSchedule, which is the preferred version of NoSchedule, and NoExecute, which means any pods that are running on the node when the taint is applied will be evicted unless they tolerate the taint.)

There are 3 kind of effect:

For example, imagine you taint a node like following scenario:

And a pod has two tolerations:

In this case, the pod will not be able to schedule onto the node, because there is no toleration matching the third taint. But it will be able to continue running if it is already running on the node when the taint is added, because the third taint is the only one of the three that is not tolerated by the pod.

Click on Cordon button to mark a node as unschedulable prevents new pods from being scheduled to that node, but does not affect any existing pods on the node. This is useful as a preparatory step before a node reboot, etc.

Then you will see the status of this node has changed to Unschedulable. If you need to Uncordon as well.

Labels on nodes can be used in conjunction with node selectors on pods to control scheduling, e.g. to constrain a pod to only be eligible to run on a subset of the nodes.

For example, if we set label role=ssd_node to node1, and set NodeSelector role : ssd_node to Pod at the same time, then the Pod will only be eligible to run on the node1.

If you need to edit the label of node, you can click More → Edit Label to update its label. 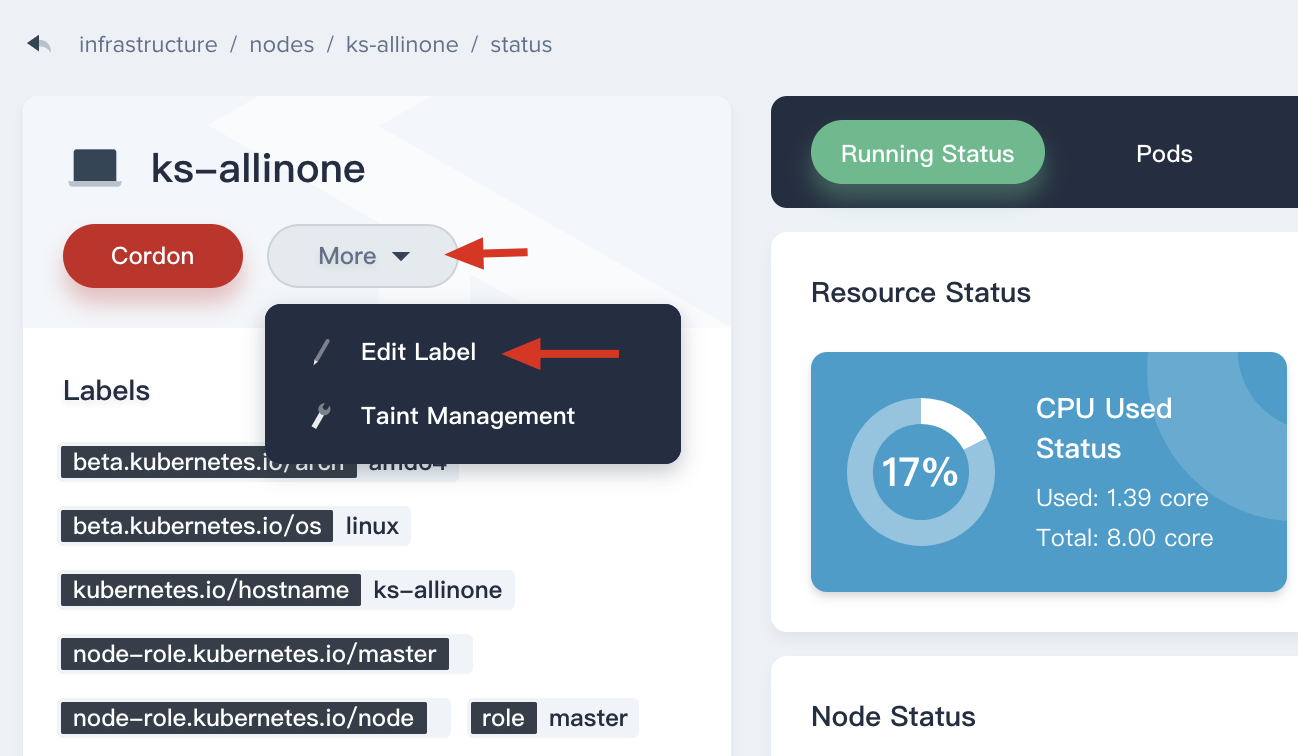 Modify the key-value labels in the pop-up window.